It would be easy to start by saying “Toronto, we have a problem,” but surely the powers-that-be in the NHL know they have big trouble in the goalie crease. Perhaps even recent talk of it earned the Florida Panthers two points and cost the Detroit Red Wings at least one on Saturday.

It’s a predator colored in gray and patterned in confusion.

I’m sure the Red Wings would second that.

After yet another controversial moment in the blue paint in the final 10 seconds led to a thrilling 3-2 Florida win in regulation, I had the choice of heading to either dressing room – the one of the victorious Cats or angry Wings.

The Cats’ room would have been a breeze, an easy choice as the Panthers surely celebrated by saying all the right words. “Well-earned win,” “greasy goal” and “build on the momentum” were likely going to be floated around the room.

But Detroit? That promised to be a little more bombastic – stewing and emotional, perhaps even R-rated (which rarely occurs). If nothing else, they weren’t going to give me the status quo quote.

I’ve never been a fan of players saying the expected, the borderline cliché quote with a feel-good touch to it. Rather, I’ll take the off-the-cuff, upset, brutally honest remark of a player operating outside his comfort zone any day of the week, especially on a Saturday night in front of a great house with crucial points on the line against a divisional rival.

So naturally I made the hard left turn off the elevator that sent me to Motown.

To say the Red Wings were upset is about like noticing the Panthers couldn’t come close to hitting the net in the first 30 minutes. Really, those were some of the most open looks I’ve seen for a Florida shooter in a long time.

Yep, these Wings were hot, fiery and spicier than anything ordered up the following day for the Super Bowl, and while profanity-free, all three players and coach Jeff Blashill spoke their piece on how the refs got it all wrong at the game’s end.

Captain Henrik Zetterberg, a fine spokesman for Detroit, cut right to the chase.

“Yeah, I do,” Zetterberg responded when asked if he disagreed with the decision. “The inconsistency in this league right now – if it’s the refs, the guys in Toronto, the suspensions, the fines – it’s hard for us as players to know what rules we’re playing under.

“You see it over and over again. Losing a game like this that’s really important that yesterday could have been called goalie interference and tonight it’s not.”

Not yesterday, but maybe the week before the All-Star Weekend.

The league discussed GI at length in Tampa during its midseason break. The Detroit side felt that the tendency before the break was to wave off goals due to the slightest contact with the netminder; however, following the exhibition in Tampa the Wings said they didn’t know what to expect from night to night and that all bets were off after Jonathan Huberdeau made contact with Petr Mrazek.

“It shocks me that they call that a goal,” said Detroit forward Justin Abdelkader, who to his credit talked about the play for over six minutes. “Everyone around the league – players-wise, coaches, general managers – don’t know what’s a goal and what’s not with goaltender interference.

“There’s such a gray area. It’s just amazing with contact like that in the crease, (Huberdeau’s) foot’s in the crease, that they call that a goal…That was an easy one, I thought…If the goalie can’t make the save because of contact, it’s got to be no-goal.

“There’s no clear-cut answer to why it’s a goal or it’s not. It seems to be different every night.”

Abdelkader said he thought “it was an easy call,” which led to Detroit’s frustration. If it was so easy, then why was the goal confirmed so quickly? I then asked Abdelkader what the remedy was.

“I don’t know if it can be corrected in the short term before the season’s over, but it’s something for sure through our (players’ association), the players and the league to make sure that we make it as black-and-white as possible,” he said.

“There can’t be a gray area because you get calls like this or ones from the past month or two where players are leaving shaking their heads, questioning what’s the call.”

Last season, Florida had a much more egregiously bad call go against them when the officials ruled Nick Bjugstad was in the crease and interfered with Detroit’s Jared Coreau, despite Bjugstad being pushed into the crease and making no contact with the backstop. The Panthers saw their 4-1 lead trimmed by a goal on the disallowance then lost in a shootout.

From my standpoint, Saturday’s game ended as it should.

Huberdeau did appear to make contact with Mrazek, who was much calmer in describing the play to the media than he was when the call was confirmed as a good goal, sinking Detroit’s hopes of getting four points in two nights. But Mike Green leaning into Huberdeau was the first contact on the play, and it created a domino effect. Plus, Mrazek may have oversold the contact a bit.

The league wants more scoring, but these controversial calls aren’t the way to go about it. If a player gets an inch or two into the crease with no punishment, they’ll take a few more inches, then both skates, then goalies are being pummeled. These situations escalate in proportion to what players can get away with.

The NHL needs to address this situation now, not in the summer. Make a quick fix, play it that way through June and tinker with it in the summer if necessary.

At the beginning of the movie The Grey, Liam Neeson plays a marksman who is hired to kill wolves around an oil drilling site. Neeson kills them daily, using skilled precision to dispose of the threat they pose to other workers.

The NHL has its own dangerous gray animal prowling at its 31 hockey arenas, but the threat is inside the cold rinks, not outside lurking in the wilderness like in the flick.

The best bet for the league would be to hurry up and kill this gray beast before it stalks a steely path all the way to the postseason. 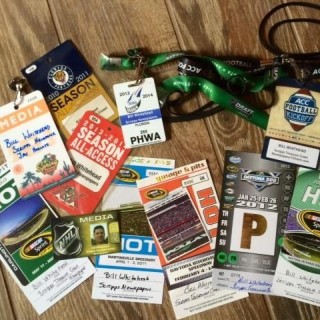 Newly appointed Florida Chapter Chair of the Professional Hockey Writers Association (PHWA). Now in my 11th season covering the Florida Panthers. Fully credentialed media working for the Associated Press, SportsXChange and newspapers in FL for 20 years. Have covered the NHL and NASCAR beat, MLB, college football, NFL and more prep sports than imaginable. But now it's, well, "Mostly Panthers Hockey." Earned an M.A. in English from the University of Central Florida in 1995. Follow on Twitter@BillWhiteheadFL